Sunday I managed to get

gustaf and Tibi to help me move the Big Items. The items that

lunabellaluna had said from the start that she wanted to have no part in moving, to the degree possible, including not actually being around during the moving process. She cited a lack of strength both mentally and in her upper body. She had to take part, a bit, in that we borrowed her brother's truck and she drove it. Then she would disappear with

corvisdog until driving was next required.

Her thick Queen-size mattress made it in fairly easily. 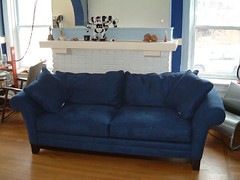 It was the couch I had been dreading, and it lived up to the hype. The problem is that the doors and entryways throughout the apartment are 30". The couch is not particularly large, but it is at least 32" at its smallest length. And there is a matter that the most direct path to the destination involves an impossible twist. Going through the back fire escape was the most direct with regard to required turns.

It may be that this law requires one to go against it before it will be accepted on faith for future tramas.

We tried to find the angle by which the couch could go through the kitchen doorway without removing the legs or taking the door off the hinges. This was impossible. We discovered that the legs were removable only by the use of a Robertson (square headed) screwdriver. Square head #2, I believe. Neither I nor

gustaf had such a screwdriver. After tracking one down, we removed the legs. That made it most of the way into the kitchen, but not enough. The door was taken off the hinges. The couch made it into the kitchen. An attempt was made to move it into the dining room, but this was blocked by the refrigerator having not been moved completely out of the path. The wood frame on the base of the couch was removed (yet more Robertson screws). It made it into the dining room and into the living room. Mission accomplished, but what could have taken as little as 20 minutes turned into a many hour ordeal. Anything removable on the couch? Look in to taking it off immediately, disregard the little voice that says that may not be necessary. Anything in the path that can be removed with less effort than holding a couch for more than 30 minutes? Move it completely out of the way. You will save time.

I am not sure if the couch is leaving with us. The big stuff is all moved in and the IKEA disposable furniture assembled. The kitchen and bathroom have been fully populated, operational, and useful. The rest of the house still needs to be put away, but there is daylight ahead.

And I haven't once mentioned here that I hate moving.
Collapse