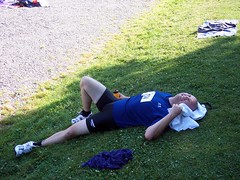 In April, I declared my goal for 2007 was to finish a Sprint distance Triathlon.

As of Saturday, mission accomplished. I competed in, and completed the Butler YMCA triathlon at Moraine State Park.

( Collapse )Now that I have completed my goal for the year... well, I'm going to keep doing it! That was fun. The picture above, taken two minutes after I crossed the finish and about twenty second after I stopped moving, is only partially indicative. An hour later, I felt fine. By mid-afternoon, I was plotting stuff to do for the rest of the day.

I had already started to plan on other triathlons I might like to try. Now I'm committing to them. Crazy fun. Time to start training again.