I've become a fan and now collector of Adam Koford's Hobotopia series. This is my second piece (the first was an anniversary present for 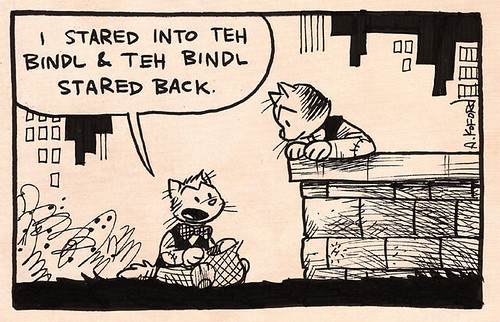 I had no say in what I received, having just paid my money to receive a unique piece. But I really like this one. Bindl is Hobocat for the basket/bundle a hobo might carry with their worldly possessions. A commentator on the Flickr page made reference to the Nietzschean Diet.

The reference, because my Philosophy major wife didn't catch it:

Wer mit Ungeheuern kämpft, mag zusehn, dass er nicht dabei zum Ungeheuer wird. Und wenn du lange in einen Abgrund blickst, blickt der Abgrund auch in dich hinein.
He who fights with monsters should look to it that he himself does not become a monster. And when you gaze long into an abyss the abyss also gazes into you.
(Nietzsche, Beyond Good and Evil, Aphorism 146)